Mandy Moore is making a triumphant return to music after over a decade away, and she's headed to Benedum Center on Friday 20th March 2020 for a intimate night of song, where she will perform a range of old and new songs for fans:

"I want the show to have threads of what the writing and recording process was like with this band, almost like you’ve been invited in our living room for an inside glimpse. It just feels good to be sharing this side of me again in its purest form, a real side of me I have been itching to put back into the universe." 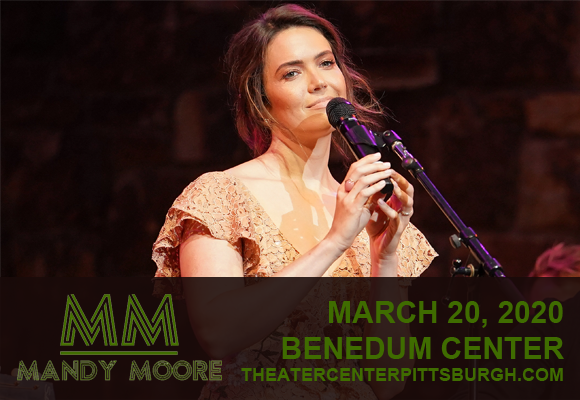 From teen pop star to two-time Screen Actors Guild Award-winning actress, Mandy Moore has had a varied career that saw her inducted into the Hollywood Walk of Fame in 2019. Her music career began aged 15 when she released her debut single "Candy", from her debut studio album So Real (1999). Moore continued on her musical journey over the next ten years, releasing the albums I Wanna Be With You (2000), Mandy Moore (2001), Coverage (2003), Wild Hope (2007), and Amanda Leigh (2009), which saw her slowly embrace her own songwriting skills and develop from bubblegum pop princess to respected singer-songwriter. Over the years, she has also maintained a successful acting career, starring in the films Chasing Liberty (2004), Racing Stripes (2005), Because I Said So (2007), License to Wed (2007), Love, Wedding, Marriage (2011), 47 Meters Down (2017), The Darkest Minds (2018), and Midway (2019). She also voiced Rapunzel in the Disney movie Tangled, and its subsequent spin-offs, and has won awards fro her performance as Rebecca Pearson in the NBC family comedy-drama series This Is Us, which she has starred in since 2016.